All cities in France

Enjoy your drive in Toulouse with premium vehicle rental from Sixt and our hassle free attentive customer service. Car hire is convenient with us, with our branches on-site in the Arrivals Area of Toulouse-Blagnac Airport, at Matabiau Train Station and in the city centre. We offer a seamless transportation experience of first class quality and a vehicle range that guarantees you will find something you love to drive for all budgets, from economy to luxury. Our vehicle fleet includes city compacts for easy driving in the city, convertibles to enjoy the French sun and saloons and estates for the whole family.

Drive in Toulouse with Sixt

Toulouse is the fourth largest city in France and is situated in the southwest alongside the beautiful Garonne River. Toulouse has a variety of quaint lanes and narrow alleyways to explore and an emerging alternative arts scene, welcoming cafes, antique shops. With a rich history, Toulouse is a city of culture and the splendid Théâtre du Capitole is its home of theatre, opera and ballet with site's theatrical routes going back to 1736. It also has a number of important and unique galleries and museums such as the Musée des Augustins, the Musée Georges Labit and the Le Château d'Eau gallery which is one of the oldest public places dedicated to photography being situated in a 19th-century water-tower which was converted to a gallery in 1974. As a fine French city, Toulouse's local cuisine must be tried including the Saucisses de Toulouse (sausage named after the city) and cassoulet Toulousain (bean and pork stew from the area). Located between the Atlantic and Mediterranean coasts, Toulouse provides excellent access to the beach via a scenic drive that will tantalise your sense. Driving is the best way to explore with car hire a popular option to get to the sunny French beaches and even venture over into Spain and the Pyrenees. With top quality motorway connections, Toulouse is also placed well for a French roadtrip to Paris, Bordeaux and Marseille. If you are in need of further travel inspiration, simply ask the friendly, local staff in one of our branches.

Celebrate the Euros 2016 in Toulouse

Travelling to Toulouse for the Euro Cup 2016 and need insider tips for tourism, what to eat, how to drive and, most importantly, enjoying the football?
Check out our useful Euros 2016 Toulouse Guide! 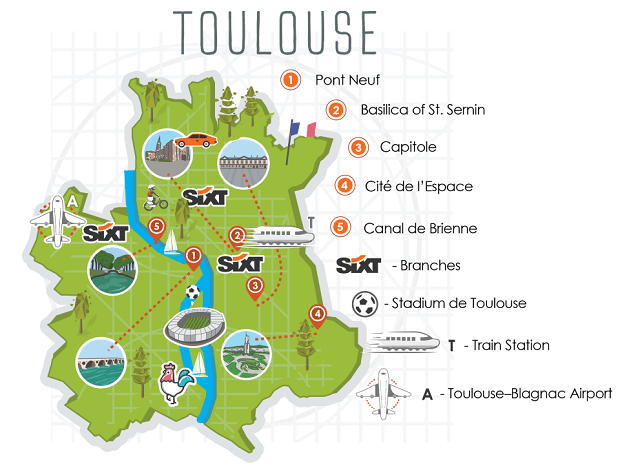