All cities in Italy

Rome wasn't built in a day and nor can it be explored in one! Rent a car with Sixt to best experience all that this international hotspot has to offer. Our trusted car rental brands such as BMW, Mercedes-Benz and Audi bring you the best in economy and luxury rental cars. Go online to carry out a price comparison and find the car rental that works best for you. With four branches located around the city, it is easy to arrange a vehicle rental and start exploring the magnificent capital of Italy. Whether you're looking for a sensible sedan or a sturdy SUV, a car rental in Rome gives you the freedom to take in all of the sights at your own pace.

Our affordable fleet of rental vehicles can be accessed at four pick up points both within the city and at major transportation hubs. Transfer from sky to street faster at our Rome Fiumicino and Ciampino airport locations, or keep on cruising with a quick jump over from the Rome Termini train station. Many of our branch locations come with a 24-hour return facility to help you make the most of your time in the Eternal City. We work hard to meet your rental vehicle needs and can guarantee you a vehicle from your desired category, although cannot reserve specific models.

Rome is at a reasonable temperature, averaging in the mid 40s, during its winter months, although cold winds and even snow are a possibility. This can be a great time to explore one of the most breathtaking cities in Europe, as prices will be lower and crowds fewer. So, after eating seasonal roasted chestnuts, enjoy all the best sights like The Colosseum, the Roman Forum, and Trevi Fountain with fewer people. Museums especially, such as the National Museum of the Middle Ages, are great to explore on colder days. In early February, look out for the Chinese New Year celebrations, and the week-long Carnival festivities before Lent begins. This is generally in mid-to-late February. If you enjoy ice skating there are rinks next to Castel Sant Angelo, as well as at the Parco della Musica. There is traffic year-round, and parking is at a premium, so a compact city car is advised. Also be aware that on one Sunday per month from January through March, there is a driving ban in the city center.

With our car rental in Rome we also offer many additional amenities to accommodate your driving style and needs. If you're visiting Italy in the cold season, winter equipment like snow chains and ski racks open up opportunities for skiing in the nearby cities of Lazio or Abruzzo. You can also help ease the learning curve of driving in a new city by opting for our satellite navigation that will get you where you need to go in Rome stress free. Other features offered at this location include several additional coverage plans including theft protection, as well as the ability to add additional drivers when you rent a car in Rome. 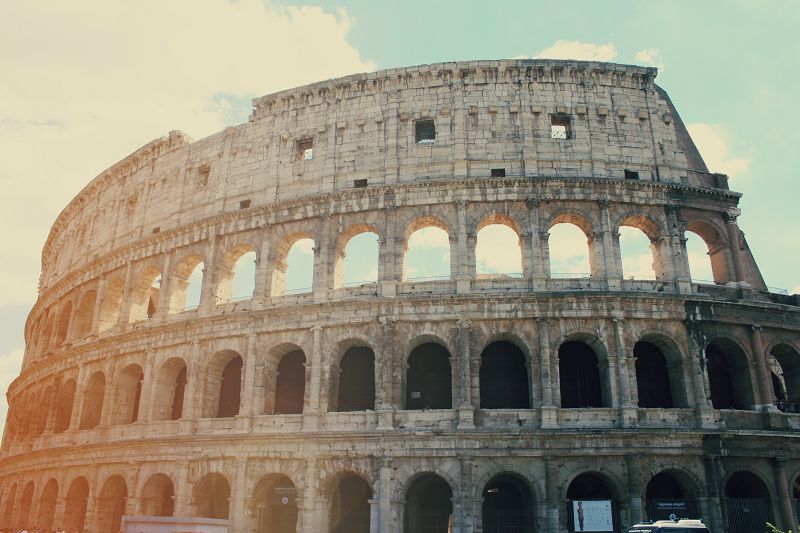 The A90 or the Great Ringroad is the main highway which runs around the city, with the A24 and A91 taking you more directly into downtown. Drivers should be especially cautious when driving around in Rome. The Italian capital has some of the highest rates for accidents in Europe with frequent speeding and tailgating cited as two of the main sources. For more information about traffic within the city, download the all in one Triposo app to get tips about where to go, what to do, and how to best get there!

Due to a weak public transportation infrastructure, Rome is notorious for having some of the worst traffic in the world. As such, to cut down on city center congestion the motor traffic limited zone was instated to ban motor traffic during weekday work hours of 6:00 to 18:00. To avoid the hassle of parking and the congestion of the city, head out into the beautiful Lazio countryside for a fresh authentic taste of Italy.

For a quick weekend spot of green during your visit to the land of winding cobblestones, the Villa d'Este is the perfect place to spend an afternoon in Rome. Most famously known as the Tivoli gardens, the UNESCO world heritage site is a popular spot for visitors hoping to visit the Museum of the Book and admire the many manicured lawns and fountains.

Italian painters are also regarded as some of the most historically important artists in the world. Boticelli, Bernini, and Perugino are all well respected within their communities and you can see examples of their frescoes and sculptures around the many churches of Rome. The most famous work is perhaps is Michelangelo's series of frescoes within the Sistine Chapel at the papal residence of Castle San Angelo in the Vatican City. The chapel serves as both a tourist site as well as the location of the papal conclave where the Collage of Cardinals gather to select a new pope.

Rome's prime location in Europe plays a key role as a financial, cultural, and business center within the EU. Some of the main industries include the technology, research, construction, and commercial sectors. Rome's economy is also heavily influenced by tourism due to its world famous art, fashion, churches, and food. The Cinecitta Studios come second only to Hollywood as one of the biggest and most influential film production companies, making Rome a rich and dynamic cultural city. While there is no separate building designated for the sole purpose of exhibitions and trade shows, the Sheraton Roma Hotel is the best when it comes to conference space in Italy.