All cities in United Kingdom

With our two car hire Birmingham branches, conveniently situated at Birmingham airport and directly in the city centre, we have your car rental needs more than covered when visiting England's second largest city. Being located in the heart of the Midlands and boasting England's second strongest economy, Birmingham is an integral international hub for both business and pleasure. Taking advantage of our car hire Birmingham branches listed below will allow you to explore this wonderful city at your own pace and even venture to nearby cities with ease.

Renting a car in Birmingham with Sixt 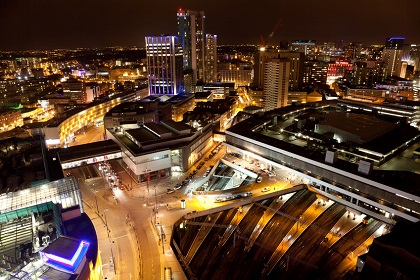 Our car hire Birmingham branches allow for easy and comfortable travel around not only the Midlands but also to many of England's other prevalent cities and destinations Renting a car with Sixt during your stay in Birmingham gives you the freedom to travel to Leeds in under two hours, to Manchester in an hour and a half, and even to the capital city London in two hours! Our two branches offer a wide range of rental vehicles including luxury cars, convertibles, 4x4s and even run around economy cars. Those travelling with a large party can take advantage of a high quality 7, 9, 15 or 17 seater minibus hire in Birmingham. If you are flying into the city, our car rental desk at Birmingham airport allows you to quickly and easily continue your onwards journey without any delay or inconvenience. If you are arriving by train, or are already in the city centre, our second car hire Birmingham location is situated in Brindley place, just a short walk from all major train stations and the canals.

Exploring the best of the Midlands with Sixt car hire Birmingham

Birmingham is one of the most culturally diverse and exciting cities in Europe, accordingly there is an abundance of places to visit and things to do. Birmingham is home to the National Exhibition Centre (NEC), which plays host to some of the biggest events in Europe, ranging from business conferences, car shows, and even bodybuilding contests. Whatever your motivation to venture to the NEC, it can easily be reached by car hire in just 15 minutes from the city centre. Through Birmingham car hire day trips are also an exciting prospect. Stratford upon Avon (the birthplace of William Shakespeare), the historical Warwick Castle, and Drayton Manor are just a few of the leading attractions that can be reached in under 45 minutes with your Birmingham car hire. For the culturally minded there is the Birmingham Symphony Hall which accommodates the world famous Birmingham Symphony orchestra. A concert here could definitely be a highlight of your trip and is highly recommended. In complete contrast, Birmingham is also well known for being the birthplace of heavy metal music. Many famous bands and influential musicians originated in Birmingham including Black Sabbath, Judas Priest, and half of Led Zeppelin.

Car hire Birmingham with Sixt offers a flexible and cost-effective solution to your travelling needs, and is the obvious choice for seeing the sights of this brilliant city and surrounding area. If you are looking for a bit of extra space, however, you may wish to have a look at our Birmingham van hire solutions, or if you are planning on tying the knot sometime soon you may be interested in how we could take the stress out of arranging your wedding car hire in Birmingham.


Other Car Hire Categories in Birmingham